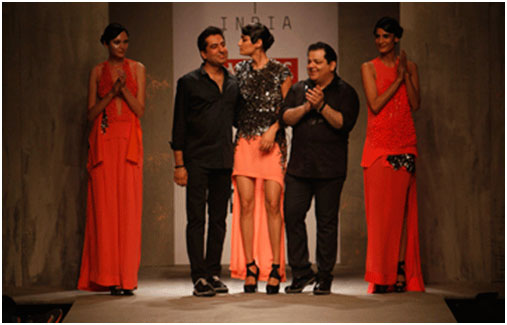 One of the noteworthy designer duos that have made a name for itself in the Indian fashion industry is that of Rohit Gandhi and Rahul Khanna. The designers, working together, present contemporary and chic style that also offers comfort and ease. Detailing to fabric and prominence on sharp, well-defined cuts has enabled Rohit Gandhi and Rahul Khanna to acquire a name for them in the Indian society. Their garments aim at being wearable by the population at large and vary from having a matt effect or a slight shine on them.

Besides the brands H2O and CUE, the designer duo also jointly launched their dream project, Palette Art Gallery (based in New Delhi) in year 2001, with the most unique collection of Contemporary Art in India. The show glamorized the conventional and brought to the limelight Indian Artists, both popular and the not so popular kinds, to mark the second anniversary of the Palette Art Gallery. Their collections are available at four standalone stores in Delhi, Mumbai, Bangalore and Kolkata, apart from retailing in Japan, Hong Kong, Turkey, Dubai, Greece, South Africa and London.