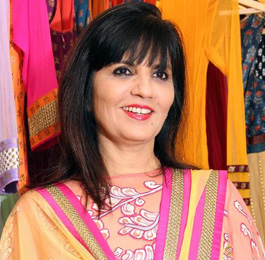 Neeta Lulla is one of India's most successful costume designers, couturiers and fashion stylists. She is amongst the most awarded fashion designers in India having won the National Film Awards from the President of India on 4 occasions for Best Costume Design in a Film and numerous other Indian and international accolades for excellence in the field of fashion designing and styling. In a career spanning over 26 years, she has worked to style the look for some of the Indian Films, biggest stars and worked with Directors in India Cinema. She is known for styling films like Chandni, Lamhe, Khal Nayak, Jeans, Roop Ki Rani Choron Ka Raja, Taal, Kisna, Darr, Aaina, Khuda Gawah,Hum Dil De Chuke Sanam, Kadhalan, Kshnak Kshnam, Jagadika Veerudu Artiloka Sundari, Devdas, Jodha Akbar, One Night with the King, Sivaji, Kochadaiyaan, Rudrama Devi amongst others. She is credited for creating the look for leading Bollywood actresses like Sridevi, Aishwarya Rai, Juhi Chawla, Kareena Kapoor, Sushmita Sen, Shilpa Shetty, Deepika Padukone, Priyanka Chopra amongst many others. Some of the lead actors she's styled include Rajinikanth, Shah Rukh Khan, Aamir Khan and Hrithik Roshan.

From simplicity to royalty, Neeta Lulla has it all to her credit. Neeta Lulla has been one name which has been prevalent in the industry since two decades now. The designer has been an active contributor in giving the actors a look to die for. Her designs have not only been recognized in India, but have also acquired great acclaims globally. The designer has made a niche for herself, creating the costumes of the era long lost. The challenge to create designs for the high profile and larger than life movies like Jodha Akhbar and Devdas have been very well met by Neeta Lulla, who tuned them to the richness and charismatic period of the movies.

From the elegant look of Chandni and the underdone colors of Yuva, to the majestic appearance of Paro and the recent Jodha, the talented designer has each time surpassed her own record, to create a new high. An expert in bridal trousseau and a national award winner, Neeta Lulla has a whole bunch of Bollywood biggies in her kitty as her clientele. From Sridevi, Juhi Chawla, Tabu, Mahima Chowdhary to Aishwarya Rai Bachchan and Abhishek Bachchan the designer has roped them all. After designing for movies and the who's who of the industry, the designer has moved a step further and launched a flagship store in Mumbai. This two-storey showroom, made of ivory, dull gold and aquamarine, has two lines of collection. While the basement caters to the bridal lounge (Neeta Lulla Coutre), the ground floor holds diffusion line (Neeta Lulla Nishq).