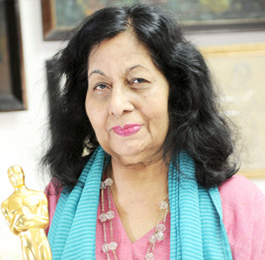 She made her debut as a film costume designer with the film C.I.D. in 1956, and followed it up with other Guru Dutt classics like Pyaasa (1959), Chaudhvin Ka Chand (1960) and Sahib Bibi Aur Ghulam (1964). In her career spanning 50 year she has received numerous awards, including the Academy Award for Costume Design (The Oscar), for her work in 1982 film, Gandhi, which made her the first Indian to win an Oscar, and also two National Film Awards, in 1991 and 2002. She started her career as a freelance fashion illustrator with various women's magazines in Bombay, including the 'Eve's Weekly';later when its editor opened a boutique, she asked Bhanu to try designing dresses, hereupon she discovered her flair for designing clothes, her success as a designer soon led to her switching career paths, where Guru Dutt asked her design clothes for his films, start with C.I.D. in 1956, there was no turning back for her from then on, she was soon part of the Guru Dutt team. A tribute was paid to her body of work at the opening of the South Asian International Film Festival, New York in November 2005.