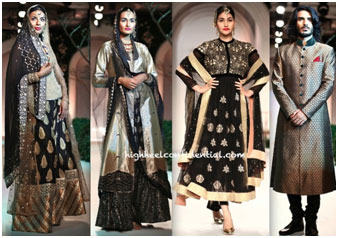 A couple who envelops within itself a whole lot of artistic and creative sensibilities is what one can define Meera and Muzaffar Ali. The designer duo of Meera and Muzaffar Ali works hard to generate stylish products which have a universal appeal and relevance. They work on all genre of creative upfront, under the label 'Kotwara'. Inspired by Sufi music, the duo has also brought out an album Paigham-e-Mohabbat, which has lyrics by some of the subcontinents' most distinguished poets.

The ingenious couple of Meera and Muzaffar Ali has brought bygone traditions back to the centre stage, with works of Lucknow and Kotwara in the global upfront. During the time they were toying with the idea of entering the fashion industry, the likes of chikan, zardozi, kamdani, tukdi, appliqué and hand embroideries had become quite acceptable in the global market. This gave them the encouragement to move ahead with their idea. The label of "Kotwara" has thus acquired a style of its own, which is both avant-garde and traditional and evokes an image which is an interesting blend of detailing and innovation, modernity and old world charm. Kotwara, an international couture brand, crafted by filmmaker, painter, Muzaffar Ali – the Raja of Kotwara, and his architect wife Meera Ali . The wearer of "Kotwara" experiences an inner tranquility, as a contrast to a highly commercial outlook. The couple has done a number of fashion shows in Delhi, Mumbai, Kolkata, Bangalore, Chennai, Singapore, Kuwait, London and New York.