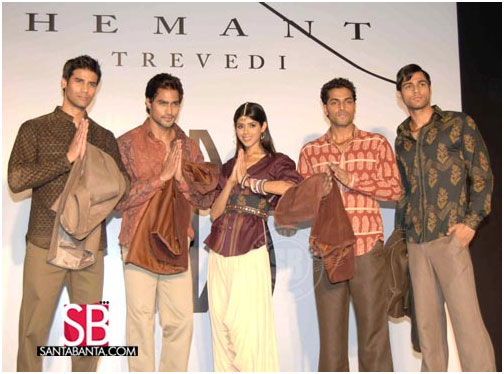 In the list of top Indian fashion designer Hemant Trivedi is one who has made a special place for himself in the Indian fashion industry. He is one of the brightest and leading versatile designers. He pursued his graduation from the Australian Technical Institute of Fashion Design. Later on, he went to New York for further studies. It was in 1980 when he came down to India. This famous designer Hemant Trivedi from India has been serving the Mumbai's S.N.D.T University for quite a long time. In the present scenario, he is the pride of Sheetal, India's famous designer fashion store. Fashion designer Hemant Trivedi's masterpiece creations have also made their way to beauty Pageants.

He has made an incredible contribution in adorning the glamour of Indian beauty queens like Aishwarya Rai and Diana Hayden. His designer apparel designs are casting spell not just in India but driving people crazy in overseas too especially in U.K.and U.S.A. His aim has been to blast this fashion world with splendid designs, which are unique and classy. His designs have not just given a boost to his career but have set the career path for the new upcoming models. He is a man of substance who is continuously delivering quality work to take Indian fashion industry to heights. He is acquired the commanding position of a trendsetter. This talented man has surely made us proud.