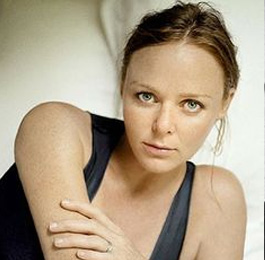 Born and raised in London and the English countryside, Stella McCartney graduated from Central St Martins in 1995. A signature style of sharp tailoring, natural confidence and sexy femininity was apparent in her first collection. In 1997, she was appointed the Creative Director of Chloe in Paris.

Stella McCartney became interested in designing clothes as a youth. At age thirteen, she made her first jacket. Three years later, she interned for Christian Lacroix, working on his first fashion design collection, honing her skills working for Edward Sexton, her father's Savile Row tailor for a number of years.

She studied her foundation at Ravensbourne College of Design and Communication, fashion design at Central Saint Martins College of Art and Design in the early 1990s. Her graduation collection in 1995 was modelled by friends and supermodels Naomi Campbell, Yasmin Le Bon and Kate Moss – for free – at the graduation runway show. The collection was shown to a song penned by her famous father, called "Stella May Day.The show made front-page news, and the entire collection was sold to Tokio, a London boutique. The designs were licensed to Browns, Joseph, Bergdorf Goodman and Neiman Marcus. In 1998, she designed her sister Mary's wedding dress for her wedding to television producer Alistair Donald.