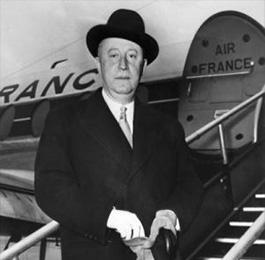 Christian Dior is one of the more interesting stories in fashion history. Born in Normandy, France in 1905, Dior came into fashion in a roundabout way. He also accomplished most of his success in the last ten years of his relatively brief and tumultuous life. Dior was known for his extravagance in women’s wear in a post-war time when women had been used to shorter and boxier skirts, which had their roots in the war-time rationing of fabric.

His "New Look," as it became known, was unapologetically feminine with skirts long, gown-like and opulent. The commercial success of his post-war designs led to a rapid rise in popularity, and also somewhat of a re-establishing of Paris as the center of the world of Haute Couture design. Today the House of Dior has expanded beyond women's wear to include also menswear, accessories, jewelry, beauty products and fragrances. The Dior accessory line includes eyewear, belts, hats, scarves and other accessories. Dior also features handbags and shoes.